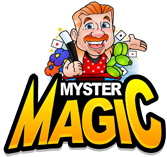 Myster Magic is absolutely brilliant. We had him at my son's 7th birthday party . Kids loved him, made them believe in magic Would highly recommend to everyone!

We were lucky enough to have Myster Magic entertain a huge group of kids at our GAA club halloween party. The kids were thrilled with his show, it was fantastic. The balloons afterwards were brilliant too. Every child got to go home with one, we will definitely be booking him again!

Thank you so much for today for Sophie's 1st birthday. All the kids had a great day! especially all the effort you put in making the balloons for the kids thank you so much

We booked Myster Magic for my son's christening. Would highly recommend him. He kept the kids attention & kept them entertained with magic & balloons. Age ranged from 10 down to 2yrs, I've never seen them so quiet! Thanks Myster Magic.

Booked Myster Magic for my daughter's 7th birthday. he was excellent. kids were enthralled for the entire show with lots of laughs and great magic. Finished off well with baloons. Highly recommended!

Wonderful party with Myster Magic today for our son's 5th birthday. Held the kids enthralled and entertained. Highly recommend this lovely man for any children's event...thanks again Catherine and Clive

We at Stepping Stones Montessori booked Mr Magic for our end of year party to entertain the children and He certainly did that. He not only entertained the children but the adults too. It was an amazing show. He really interacted with the children and got all of them involved in doing the magic. I would highly recommend Mr. Magic.

Absolutely brilliant best magician iv seen at a kids party. His balloon animals are brill. He made a massive octopus best thinking seen someone make. If I could give more stars I would.

Seen this man today and i have to say he's absolutely brilliant, some of the balloons he made I've never seen before

Paddy is up there as one of the best

Was at a party today with him and he was brilliant! He got everyone involved and everyone had great fun. Really good at balloon modeling. Would definitely recommend him and rebook him. Thanks again for a great day

Thank you so much for your magic show at my parents Golden Wedding Anniversary party last Sunday in Ballykisteen. Everyone, from young to old, enjoyed it, especially when you dressed my dad up and got him to help you with your trick!! We're still talking about it! Will certainly recommend you to anyone looking for party entertainment. Thanks again, Chris

Best Magician show I've ever seen. The kids all got to join in on the magic and the balloon making was absolutely amazing. Would highly recommend Pat for any kids entertainment. Thanks again Pat for the top class entertainment!'

'Great entertainment, brought kids of all ages into the magic show, then the balloon making skills were just amazing. Kids delighted going home with their balloon swords. Thanks Pat'

'Thanks Pat for the absolutely fantastic entertainment you provided for our Company Kiddies Christmas party yesterday. It was definitely the best we've had. I would strongly recommend you to anyone organising a kids party. Hope you have a lovey Christmas,

Had Myster Magic for my daughters 6th birthday party and all kids and adults were highly impressed with the show. The magic was brilliant and he involved the children so much - a lovely nature with the kids and he made absolutely sure that every child enjoyed themselves thoroughly! The balloon animals and disco were also a big hit and he stayed well over his time to ensure that every child got their balloon and went home happy. Could not recommend more highly- born to be a children's entertainer- keep up the good work Pat!!!

Thank you so much for the entertainment at my son, Bradleys 9th Birthday party. We all ( adults included ) had great fun, enjoyed the magic, the fun, the laughter. I would highly recommend you for any event. We will be talking about this for a long time yet. Bradley says it was his best party EVER!! Thank you again..x

Thanks Myster Magic the kids really enjoyed the party from start to finish! They loved the magic and the balloons were a great hit. Look forward to booking you again sometime.

We hired Myster Magic for my daughters communion. He was amazing from start to finish. All the kids, even the teenagers, got involved and 'helped' Pat out with his magic tricks. Anyone who can get the attention of teenagers for almost 2 hours deserves a medal in my book! My daughter Aideen, whose communion it was, told me that Myster Magic was 'awesome'. Pat has a fantastic way with kids and keeps their attention throughout his whole show. I would definitely recommend him for any kids event. Thanks Pat!

time he went home. Cian Picked myster Magic himself from the internet and was delighted when he saw Pat arriving , I didn't need to have to worry about Cian any more as Cian is a mad Michael Jackson Fan and Pat played tonnes of Michael Jackson and jedward after the magic show which was fab and then the balloon show which was excellent. The amount of people that came up to me after the show complimenting Pat was unbelievable as he is great way with the kids. I would have no hesitation in recommending Pat " Myster Magic " or indeed using him again. Thanks again!"

Anne and Michael our Sons Cian's confirmation Party June 2013 " Thanks a million Pat we would have been lost without you, thanks for making the party so great"

" I hired mystermagic for my sons 7th birthday party and have to say it was a fantastic show, kids had an amazing time I would highly recommend you and will definitely be getting you again.

"thank you so much Pat AKA as MYSTER MAGIC for making Aoibhe's birthday so much fun she was so happy, couldn't stop talking about it. :-)"

Brigid Tierney Mullins I booked Myster Magic to do a show for a birthday party. It was a great success with both the adults and kids being well entertained. The magic tricks were very impressive and well performed, and Myster Magic involved all the kids in various tricks. The balloon artistry was amazing to watch and everyone got balloon keepsakes to take away. All in all it was a great show and I would have no hesitation in recommend Myster Magic.

I went to a Myster Magic show to take pictures for his website, and I thought he was great. The kids loved it.

Got Myster Magic for my 5 year old daughter's Birthday. entertained 22 children for over 2 hours and shows were excellent. Children still talking about him. balloons for everyone and very happy

children going home. well worth booking for any occasion.

Feedback: Got Myster Magic for an end of school show and he entertained all the kids and his balloon models are just fantastic can't say enough about his show. kids still talking about you well done. will definitely be contacting you again.would highly recommend him for any occasion. Worth every penny.

Feedback: Had MysterMagic for a beaver cub/scout event 6-12 year olds and kids were amazed with all the magic and fun,kids loved the chance to be able to help out with the magic and delighted with the balloon modeling it all went down a treat would recommend him hands down for any event for that age group ,thanks for everything.

We had Myster Magic for our sons christening and found him excellent. We had kids ranging from 2 to 14. They all had a great time. Each one of them enjoyed the show especially the magic show. The adults also loved the show. All the kids got involved which made it great. Thanks Myster Magic for making the Christening such a wonderful stress free day. Would definitely book again.

We had Myster Magic for my son's First Communion party and I have to say that all the children and the adults enjoyed the show and thought it was fantastic. Many thanks for a great show.

Submit your feedback from a show by clicking here....

* All Communion deposits are non refundable but can be used against another occasion ie: birthday party (future date and time to be agreed and confirmed by Myster Magic)